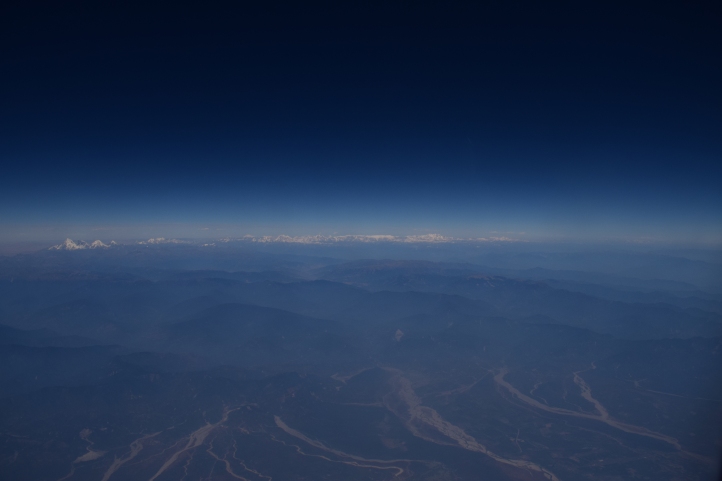 26th Jan 2017, Republic Day: A day prior you receive a message from your airline please come at least 2 hours earlier because of the extra security measures put for the important day.

So for an early morning flight, I had to start even earlier. It was a long weekend and a national day, there was a long queue at the airport counter, but it moved fast and after security check and I was in 1 hour before the take-off. My travel partner also reached on time with homemade breakfast saving precious bucks in buying expensive food at the airport. We were traveling in different flight landing to Guwahati.

The next leg of the journey was by self-driven car. Usually, I hitchhike on the local transport, finding the cheapest way to reach the place. This time I had an office colleague who was eager to drive among the hills. This added an extra cost to the trip but I was hoping to cover more ground.

I was hoping to buy some liquor stock for the trip at the duty-free shop at the airport but as it turns out it was a dry day meaning there will be no alcohol in all of India for 26th Jan. After boarding the aircraft announcement was made that the air space is being used for republic day airshow and the aircraft will remain grounded until further announcement! So much for the early security checks.

Finally, the aircraft took off after one and half hour delay, allowing to finish few more chapters in the book. I like flight and train journeys, you can read peacefully, bus rides can be too bumpy to concentrate.

I was told by my friends when flying to Guwahati from Delhi always take the left side window seat. I was not sure why then I saw the Himalayan ranges and the Brahmaputra river throw the window seat and it was magnificent. There is the horizon, a flat line, and then there is a snow-clad peak peeping through the cloud cover. If you look closely the horizontal line starts to look like a curve.    The blue horizon, white and fluffy clouds, snow-covered peaks made the whole flight experience very memorable and the delay in take-off was buried in these good memories.

After landing in Guwahati, the first feeling is of relief from chilly weather in Delhi. It was a warm and breezy atmosphere in Guwahati. We picked up our car and started towards Shillong. The drive to Shillong was around 3 hrs by car. The bus will take around 4 to 4.30 hrs. There are many roadside shops selling fruits and snacks. We decided to stop at one of the fruit stalls and bought a whole pineapple for Rs 50.  After the first bite, I knew, this was going to be a staple food for the trip. It was the best pineapple ever. Another noticeable change is the prominence of women in all the local businesses.

After reaching Shillong, we stayed in a home-stay turned into a guest house set up. All the interiors were wooden and it had very rustic feeling about it. The driver and I were tired and wanted to find some place selling liquor in the black market. Finally, we could get hold of a rum bottle for twice the price. That’s  the end of Day 1.

Highlights of the Day:

The trek to Double Decker Living Root Bridges starts from the village called Tyrna. The drive from Shillong to Tyrna is beautiful. There was no rain, so the area was looking arid but I can imagine this will be heaven in monsoon. (Monsoon Epigram).  There are small but very quaint villages en route, very different than the mainland villages.You unconsciously start comparing the mainland vs this place and realize may the definition of development by our beloved leaders is utter rubbish.Everything seems so organic here. After asking directions for some time, we finally reached the village. Do not depend on the GPS for directions as it is unreliable in the region.

You unconsciously start comparing the main land vs this place and realize may the definition of development by our beloved leaders is utter rubbish.Everything seems so organic here. After asking directions for some time, we finally reached the village. Do not depend on the GPS for directions as it is unreliable in the region.

There was no plan to stay in Nongriat for more than one night. After reaching Tyrna, you have to climb down around 3k stairs to the living root bridge. The sight of cobalt blue streams of water is really exciting and crossing them with wire bridges is an altogether different experience. Climbing down to the living bridge should not take more than 2 t o3 hrs but there are scenic places en route. After reaching there, I should have looked for homestay to rest for the night but in my boyish enthusiasm, I went straight to the double-decker bridges. It is one tick off the bucket list. There was not much rain, so the stream flowing below the living bridge was not the peak flow. The water is crystal clear and the small fish nibble at your feet, kind of natural pedicure spa. My travel companion also reached after some time there and we realized we should search for accommodation. There are limited places and on first come first serve basis. We finally convinced one homestay owner to accommodate us in one of his relative’s home. I will write in detail about this wonderful guy and his place in a separate piece.

The evening was quiet. We sat at the living root bridge for a long time. Other travelers at the guest house were interesting.  Talking over to people food and drinks was an excellent part of the stay. Next day we go to rainbow falls.